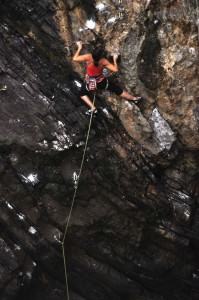 Bristol gal, Wendy Coles recent super send has been Eurofighter (8b) at Shipwreck Cove – a 25m steep sport route located on one of the Gower’s best sport climbing venues.

Following along the lines of many recent strong female ascents, Wendy Coles managed to ticked her FIRST 8b in September. Luckily just as the season was coming to an end. And unlike her first 8a, at a crag that’s close to her home turf, the Gower, South Wales!

Because Bristol news doesn’t spread as far as Norway, I only found Wendy had ticked the grade through Natalie Berry’s post on UKC (http://www.ukclimbing.com/news/item.php?id=70037)

So I caught up with Wendy, to nudge a few more details out of how the climb went for her.

First things, due to Rhossili’s quick tidal system, did you get caught out by the tide?

We did have to wade out on a couple of occasions due to the tide coming in really quickly….when it comes in you have to make a pretty quick get away!!

How many tries do you think you had on the route?

It is hard to say, I tried Airshow, the 8a+ a lot – I found the crux really hard and kept falling off at this point. Once I had learnt the subtleties of the moves I started to get through the crux much more consistently. Eurofighter shares the crux of airshow and then branches out right to a harder finish. Because I knew the crux of airshow so well it meant that Eurofighter went much quicker than I had expected.

What made you want to send the route? The moves? The location? (The fact of beating the boys to it?!)

Shipwreck Cove is situated on a beautiful beach and is a great place to spend your summer weekends, making it an ideal place to have a project. The climbing has a very Spanish feel to it. The routes are long, quite sustained and have great moves. Both Airshow and Eurofighter are by far the best routes that I have climbed in the UK – I just wish the crag was bigger! As for beating the boys to it – I think I just got lucky and did it before the crucial hold was pulled off at the top!

I don’t do any specific training – although every winter I plan to do some but I am just not motivated enough to do it! I suppose my training is just climbing lots. Now that winter is setting in that’ll mean going back indoors and leaving Shipwreck until next year!

Do you think you’ll be more inspired to try more 8b’s, now that you’ve ticked your first one?

I would love to get on more 8b’s but there aren’t many to try in the South West so I can’t see me getting on another one anytime soon unfortunately.